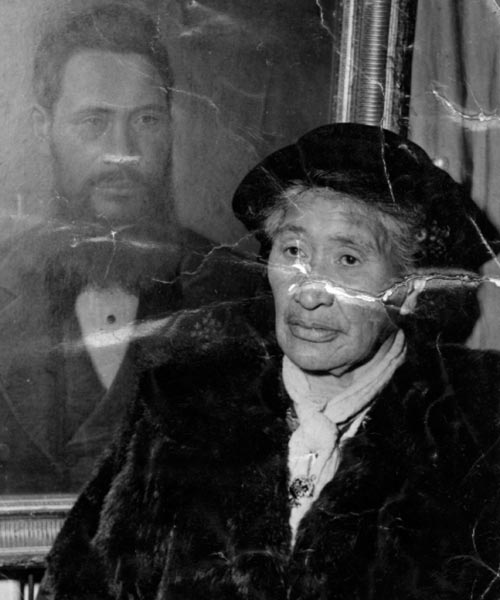 Te Heke-rangatira-ki-Nukutaurua Boyd, commonly known as Heke Boyd, and also as Agnes Boyd, was a woman of high rank and great mana. Her name, which she shared with a great-grandparent, means ‘the migration of chiefs to Nukutaurua’, and commemorated the exodus in the 1830s of Wairarapa’s chiefs to the Mahia peninsula to take refuge from invasion by Taranaki tribes. Heke was born at Papawai or at Greytown about 1885 or 1886, the eldest of five children of Pikihuia Rangitakaiwaho (Pikihuia Manihera) and her husband, Hokotoki (Toki) Paora. She was a direct descendant of the chief Pirika Po of Ngati Moe, the early nineteenth century owner of the land on which Papawai marae stands. Heke probably attended Papawai Native School, but was also taught in the house of Paratene Ngata, the father of Apirana, in the Waiapu Valley. On 26 August 1911, at Napier, Heke, who then gave her name as Aggie Toki Paora, married Ernest Boyd, a farmer, and son of George Gillespie Boyd and Riria (or Pare Pikaka) Huihui; he had been born at Awanui, Northland. They were to have 11 children, five of whom died in infancy; they may have adopted another daughter.

When Heke was born, the leadership at Papawai was shared between her maternal grandfather, Hoani Te Rangitakaiwaho, who had made available the land on which the marae stood, and the new young political leader, Tamahau Mahupuku. Heke grew up during the development of Papawai into a great Maori political centre; she would have been approaching her teens when the Maori parliaments of the Te Kotahitanga movement were held there in 1897 and 1898. By the time Tamahau Mahupuku died, in 1904, to be succeeded by his niece and Heke’s kinswoman, Niniwa Heremaia, Heke had been part of the expansion of the settlement and marae to a population sometimes estimated at 3,000.

However, the affluence of Heke’s Mahupuku and Te Rangitakaiwaho relatives was largely dissipated. Niniwa maintained a hugely extravagant lifestyle and the family’s land interests had been so divided among each generation that the income from any of them amounted to only a few pence or shillings a year. Many of the younger people left, looking for work in the towns, or following Niniwa to Wellington. By 1919 Heke had settled in Carterton, where she was to live for the rest of her life.

When Niniwa died (without issue) in 1929, her once-flourishing estate was encumbered with debt. Heke considered herself the proper heir to Niniwa and her authority, and especially to tribal heirlooms, some of which were on loan from chiefly families from the West Coast; Niniwa had pawned them. She was to make continuing efforts, during Niniwa’s lifetime and after, in unsuccessful litigation to recover this estate.

From at least the 1930s Heke worked as a second-class interpreter, translating wills and land documents for various legal firms. This work sometimes involved trips to Wellington, and many appearances in the Native Land Court and some in civil courts in the various towns of Wairarapa. She also made appearances concerning her own land interests: on 13 November 1935 she successfully applied to the court to be appointed a Papawai trustee.

Papawai marae had been decaying for years, and land on which the settlement depended was gradually being sold. As a trustee of the marae, Heke was without resources to improve it. In 1950 she successfully applied to the Maori Land Court to have the marae’s land converted from private ownership to a marae reservation. She gave permission to a group of young Maori to improve the meeting house and grounds and donated money for paint. The grounds were cleared, the meeting house painted and a roadway established. The tekoteko (carved figures) surrounding the marae were taken down to be more securely re-erected on concrete pedestals, but work ended before this could be done and they were left rotting on the ground. Papawai was to remain in this state until after Heke’s death, when the Papawai Pa Restoration Committee raised funds and voluntary labour in the 1960s.

When important visitors came to local marae or Wairarapa Maori visited other areas, Te Heke-rangatira exercised her right to be among the speakers. She sometimes represented Ngati Moe, Ngati Hikawera and Ngati Mahu, and once spoke for Wairarapa during a presentation to Apirana Ngata in Wellington. On these occasions she wielded a silver-headed cane, which had been a gift from the duke of Gloucester during his visit of 1934–35. Her rank ensured that Heke was presented at royal visits: in 1901, to the duke and duchess of Cornwall and of York; and in 1920, to the prince of Wales. On 2 January 1954, at Rotorua, she is said to have broken protocol by engaging Queen Elizabeth II in animated conversation for several minutes concerning the cane.

Heke was elected inaugural vice president of the Carterton branch of the Maori Women’s Welfare League in 1951. It is likely that she was also involved with the Papawai and Kaikokirikiri Trusts Board, which administered a scheme to provide educational grants to young Wairarapa Maori.

In 1944 Heke and her siblings and cousins succeeded to the family interests in the Pouakani block, situated between the Waikato River and Mangakino Stream north of Taupo. About 1912 it had been given to Wairarapa Maori in compensation for their surrender to the government of the Wairarapa lakes in 1896. This pumice-ridden, poor-quality land lacked road access, the only approach being by barge across the Waikato River, and had in consequence been of no economic benefit. In 1946, without notifying or seeking consent from its owners, the Public Works Department began preparations for taking the land, without compensation, for a hydroelectric scheme. G. P. Shepherd, under-secretary for the Native Department, protested on the owners’ behalf. Meetings of owners, including Heke, were arranged. Now that there was at last access by road, a Maori committee made plans for the development of the best part of the block into farms for landless Wairarapa Maori who were returned servicemen. In September 1947 Peter Fraser, as both prime minister and native minister, visited Greytown and promised speedy and substantial assistance to the Maori owners to develop the block. In 1948 Heke petitioned Parliament unsuccessfully to have the Maori Land Court investigate the block.

The Public Works Department eventually acquired nearly 800 acres for a dam and roads, for which the owners were to be compensated, while other land needed temporarily for the township of Mangakino was to be leased for 21 years. By the mid 1950s the main issue was the preservation of Mangakino after the lease expired in 1969, so that the Maori owners could at last draw some worthwhile revenue from the block from business tenants in the town. Heke attended meetings of owners at Greytown in February and April 1956, at which they decided to gift to the Crown the land at Mangakino on which government buildings, churches, the hospital and school stood so that the town could continue.

Te Heke-rangatira-ki-Nukutaurua Boyd made her last public appearance during a wreath-laying ceremony in Wellington in late 1958 or early 1959. Afterwards, the prime minister, Walter Nash, escorted her to her car. She died in Masterton Hospital on 29 May 1959, and was buried at Papawai. Her husband, Ernest, had predeceased her in 1953.