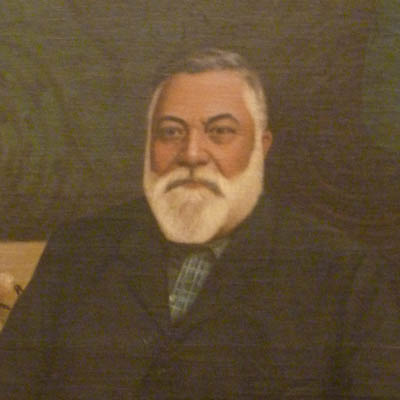 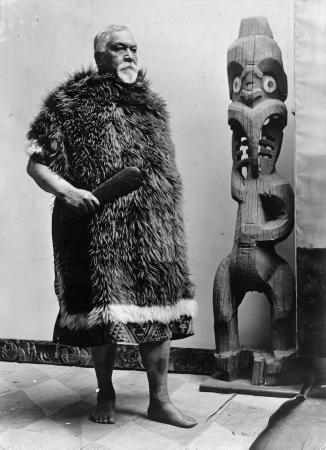 Hoani Te Whatahoro Jury, also known as John Alfred Jury, John Alfred Te Whatahoro Jury, Te Whatahoro Jury, and Hoani Turi Te Whatahoro, was born on 4 February 1841 at Rakaukaka, Poverty Bay. He was the eldest son of Te Aitu-o-te-rangi and her husband, John Milsome Jury, who was working as a carpenter for the missionary William Williams. In March 1842 Hoani and his parents moved to the Wairarapa region with Pehi Tu-te-pakihi-rangi and some 400 Wairarapa people who had been living temporarily at Nukutaurua, on the Mahia peninsula. The Jury family initially settled with the other Wairarapa people at Te Kopi-a-Uenuku, Palliser Bay. Some time in 1845, soon after European settlers had taken up leases for sheep stations in Wairarapa, the family sailed over the open bar of Lake Onoke into Lake Wairarapa and up the Ruamahanga River.

Hoani’s parents built their first home on land which Te Aitu claimed as her own. The land, called Waka-a-paua, was on the Ruamahanga River, some three miles north-east of Martinborough. There, and in the district north-east of Lake Wairarapa, Hoani spent his early years with his mother’s people, Ngati Moe, a hapu of Rangitane and Ngati Kahungunu. He learnt of the traditional fishing places on the shores of Lake Wairarapa, and Te Aitu showed Hoani, or Tiaki as he was known as a boy, all the boundaries and the special places of their ancestral land. Later he worked as a stockman for Angus McMaster at Tuhitarata, Lake Wairarapa. 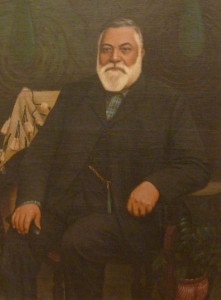 Hoani, with his sister Annie and brother Charles, was initially taught to read and write by his father, who later sent him to Wellington to be tutored by a Mr Crawford (Kerewhata). Te Aitu did not agree to her son living with a man whom she did not know. After a month one of his mother’s relatives fetched Hoani back. His further education was at mission schools and, according to family tradition, was paid for by Governor George Grey.

In 1854, when Hoani Te Whatahoro was 13, his mother died. He and his father then quarrelled over some horses and they went their separate ways. His father, some time later, moved to Glendower, a block of land at Ponatahi, south of Carterton. He took with him the two younger children, eight-year-old Annie and four-year-old Charles. In October 1868, in the Native Land Court at Greytown, Hoani, supported by his father, successfully established his own right, and that of his brother and sister, to Te Aitu’s land. The court awarded Jury’s Island, an area of 55 acres, to Charles and Annie Eliza Jury, and Wharehanga, a peninsula of about 400 acres to the south, to Hoani Te Whatahoro Jury.

Hoani Te Whatahoro became a prolific writer on Maori traditions and customs. He usually acted as a scribe or recorder. He began this work in the late 1850s, when a large gathering of Wairarapa Maori came together to discuss land and political questions. It was suggested that the tohunga present should explain some of the tribal traditions to the assembled people. Three tohunga consented to teach: Te Matorohanga (also known as Moihi Torohanga) was appointed to lecture, and the other two (both unnamed) were to assist by recalling any matters that Te Matorohanga might omit. The Wairarapa people also decided that these lectures should be written down by Hoani Te Whatahoro and Aporo Te Kumeroa. At Papawai, near Greytown, in 1865, Hoani recorded traditions given by Te Matorohanga, with Paratene Te Okawhare and Nepia Pohuhu assisting. He continued to record information from the teachings of Nepia Pohuhu and Te Matorohanga until their deaths in the 1880s.

From about 1870 to 1877 Hoani Te Whatahoro seems to have lived at Putiki, Wanganui, where he was at various times a recorder and an interpreter. In 1868 he was acting as an advocate in the Native Land Court. His duties took him to Horowhenua, Wellington, Wairarapa, Hastings, Gisborne and Tolaga Bay, as well as other parts of the North Island. From 1878 to the mid 1880s he was in Gisborne and the Tolaga Bay area. He moved to Wanganui about 1902 and later farmed at Ohotu, south of Taihape, until about 1909. While living at Wanganui, he continued his interest in tribal traditions and copied Ngati Tuwharetoa manuscripts and information from Te Umukura and Whaiti-nga-rere-waka. For over 40 years he also returned often to Papawai for short periods.

In 1883 missionaries of the Church of Jesus Christ of Latter Day Saints began work among the Maori at Te Ore Ore, near Masterton. Several people, including Hoani Te Whatahoro, were attracted to this faith. From 1886 to 1888 he was one of those who assisted Mormon elders in translating the Book of Mormon into Maori. On 26 June 1900 he was baptised into the Mormon church and at the same time confirmed, at the Papawai branch of the church.

In the 1890s Hoani Te Whatahoro was involved with Te Kotahitanga. This movement advocated self-government for the Maori people through a Parliament, and claimed this as a right based on the Treaty of Waitangi. The Maori parliament wanted Native Land Court work to stop, all Maori assessors to resign and the sale of Maori land to be placed under Maori control. In June 1892 Hoani was elected chairman of the parliament held at Waipatu, near Hastings.

Hoani Te Whatahoro was also a member of the Tane-nui-a-rangi committee, to which the most learned men of Ngati Kahungunu belonged. In February 1899, at Papawai, Tamahau Mahupuku made a plea for the recording of Maori learning from elders with great knowledge. He suggested setting up groups to encourage this, and an appeal was made for old manuscript books. The Tane-nui-a-rangi committee met from 1905 to 1910 to consider the books which they had gathered. Once a manuscript was approved by the committee each page was stamped with the committee’s seal. Some were given to the Dominion Museum where they were copied, but the original manuscripts have vanished.

Although Hoani Te Whatahoro made important collections of Maori traditions and nineteenth century literature, much of this material was passed on to several European scholars. Elsdon Best, T. W. Downes, S. Percy Smith and John White all wrote articles which incorporated information supplied by Hoani Te Whatahoro, but made little or no acknowledgement. One of the more important of these articles is Downes’s ‘History of the Ngati Kahu-ngunu’, published in sections in the Journal of the Polynesian Society between 1914 and 1916. Percy Smith, president of the Polynesian Society, used other writings of Hoani Te Whatahoro. He translated and published, under the title The lore of the whare-wananga, the teachings of Te Matorohanga and Nepia Pohuhu that had been written down by Hoani 48 years earlier. The first part of these teachings was printed as volume three of the Polynesian Society’s Memoirs in 1913, the second part was first printed as chapters in the Journal in 1913 and 1914, and then reprinted in 1915 as volume four of the Memoirs. In these publications the ideas, opinions and interpretations of Smith dominate the English translation. Important manuscripts of Hoani Te Whatahoro are now held by the University of Auckland, the Alexander Turnbull Library and the National Museum.

Hoani Te Whatahoro Jury had seven wives and fifteen children. His first wife was Pane Ihaka Te Moe Whatarau, with whom he had Te Aitu-o-te-rangi Wikitoria (also known as Sue Materoa) and Muretu William; his second wife was Hera Ihaka Te Moe Whatarau (a sister of his first wife), with whom he had Meri Kiriwera, Te Waikuini and Te Hiwa. Huhana Apiata was Hoani’s third wife, with whom he had Tiweka Rangihikitia. His fourth wife was Keriana Te Potae-aute, and they had nine children: Tepora, Te Uranga, Puhinga-i-te-rangi Margaret, Renata Te Manga, Takotoroa, Makaretu, Te Rina, Manapouri Te Rina Huitau and Hamuera Porourangi. His fifth wife was Mata Pohoua (also called Mata Te Rautahi); his sixth, Hera Erena Rongo; and his last, Hera Ferris; they had no issue by him, although they did bring up some of his grandchildren.

Hoani Te Whatahoro Jury died on 26 September 1923, at the Greytown home of his eldest daughter, Te Aitu-o-te-rangi. He is buried in the Papawai cemetery. A man of great knowledge, he is said to have completed six of the seven grades of the whare wananga. He is represented in the painted panels of the porch of the meeting house, Hikurangi, at Papawai.