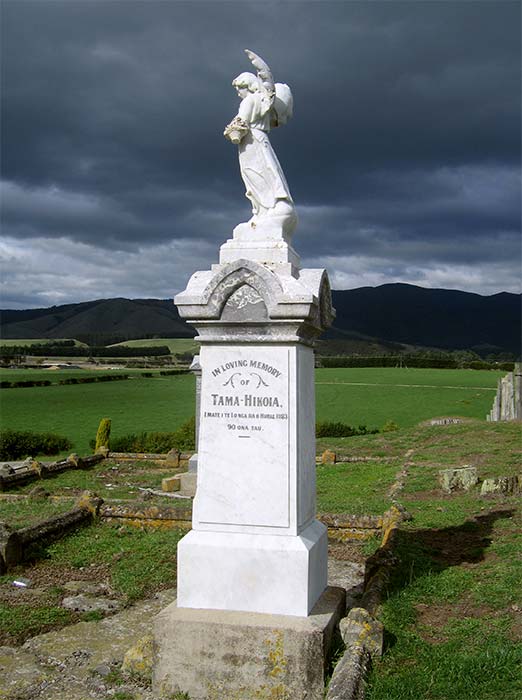 Te Hiko Piata Tama-i-hikoia was one of the leading Wairarapa chiefs from the 1840s to the 1880s. The date and place of his birth are uncertain; it may have been at Te Ngapuke (Te Waitapu, near Tuhitarata) in the 1790s. His principal hapu were Rakaiwhakairi, Ngati Kahukura-awhitia, and Ngati Rangitawhanga; his tribal affiliations were with Ngati Kahungunu, Rangitane, Ngati Ira and Ngai Tahu of Wairarapa. Te Hiko was descended from the ancestor Kahungunu through Rakaitekura and Rangitawhanga, from whom he inherited rights over lands in Southern Wairarapa.

The early adult life of Te Hiko was shaped by the invasions of Wairarapa in the 1820s and 1830s by northern and west coast tribes. The most serious was a war expedition of about 1826, made up of Te Ati Awa, Ngati Tama and Ngati Mutunga, together with some Ngati Toa and Ngati Raukawa. After the Wairarapa people had beaten off an attack at Pehikatea pa (near present day Greytown) about 1833, Pehi Tu-te-pakihi-rangi and Nuku-pewapewa, anticipating a further attack, led most of their people to Nukutaurua on the Mahia peninsula. Te Hiko and his family were among those who took refuge there.

Nuku-pewapewa led an attempt to return to Wairarapa in the mid 1830s. It failed but he did manage to capture Te Uamairangi and Te Kakapi, the wife and the niece of Te Wharepouri of Te Ati Awa. The price for the ransom of Te Kakapi was the return of Wairarapa to its former inhabitants. After this negotiation Te Hiko and his people, with other Wairarapa hapu, returned in a migration which was not completed until about 1842.

By the time of his return Te Hiko was married to Mihi Mete, and had two children approaching adulthood, a son, Wi Tamehana Te Hiko, who was one of the missionary William Colenso’s teachers by the mid 1840s, and a daughter, Ani Te Hiko, later to marry Wi Hutana. Te Hiko was recognised as the leader of Rakaiwhakairi and Ngati Rangitawhanga.

The return of the Wairarapa people coincided with the beginning of Pakeha interest in the region for settlement and for sheepfarming. In the mid 1840s Te Hiko leased land to Angus McMaster, an early runholder. McMaster and his wife, Mary, settled at Tuhitarata after an 11 day journey on foot from Port Nicholson (Wellington). Thus McMaster became Te Hiko’s client, living under the protection of his mana, and known to the Wairarapa people as ‘Hiko’s Pakeha’. The two men were sometimes at odds, when the one thought the other was encroaching on his rights, but their close relationship endured and extended to their families. The descendants of the McMasters often called their children by names associated with Te Hiko. Angus’s son Hugh was also known as Tuhitarata. After the Pakeha family was established, Te Hiko built his pa at Te Waitapu, not far from their homestead. He lived there for the rest of his life.

When the government began buying land in Wairarapa, Te Hiko, like many chiefs who had ‘adopted’ a Pakeha, would not sign any deed of cession unless he had an absolute assurance that McMaster’s interests would be protected. As a result McMaster came to control about 13,000 acres in the Tuhitarata, Matiti, Mapunatea, Otuparoro and Oporoa blocks, much of it leased from Maori owners.

Te Hiko and his people benefited from these arrangements. They made profits from trade in pork, potatoes and wheat with the growing settler population. And though the rents were low for such large areas, they increased year by year, from £300 in 1847 for all Wairarapa leased land to over £800 a year in 1850. Te Hiko and his fellow chiefs found leasing so advantageous that they rejected government efforts to buy land in 1848 for the proposed ‘Canterbury settlement’. As a result, the settlement was located in the South Island.

In the 1850s the government continued its efforts to buy Wairarapa land, and to break the alliance of Pakeha squatter and Maori landowner. Governor George Grey visited the district and gave an assurance that the rights of squatters, like McMaster, to their homesteads and to the essential parts of their runs would be protected. Donald McLean, the chief land purchase commissioner, made the breakthrough in 1853 with the purchase of the Castlepoint block, and from that time on land-selling was under way in Wairarapa.

It was the younger men who were keen to sell and tried to persuade their elders to agree. This caused a good deal of conflict. Raniera Te Iho-o-te-rangi and Te Manihera Te Rangi-taka-i-waho were prominent among the younger men; Te Hiko’s son Wi Tamehana was also involved. In general Te Hiko was opposed to sale, as the published deeds show. In the first series of sales his name appears only on the deed affecting McMaster’s Tuhitarata lands, and up to 1876 his name appears on only four deeds of sale; his son’s name is on eight, Raniera Te Iho’s on thirteen, and Te Manihera’s on twenty-six. Te Hiko held aloof from the sale of the Turakirae block, which was effected in Wellington by Hemi Te Miha, Ngairo Takataka-putea and Raniera Te Iho. In an effort to change Te Hiko’s mind, McLean offered reserves for all people affected, and payments to be spent on hospitals, schools and a flour mill.

It is ironic that Te Hiko, previously opposed to land sales, should be remembered chiefly for the sale of his fishing rights in Lake Wairarapa to the government. It is clear that he had important rights over the lake. While they were not exclusive, decisions about the lake had to include him. In particular, he was the guardian of its fishing resources. Maori and Pakeha interests were in conflict over the lake. The government was eager to control the outlet, to keep the bar open and so reduce the flooding of fertile lands. Maori opposed this, because one of their major resources, the eel harvest, was at its best when the lake was in flood.

Te Hiko sold his rights in 1876; the price was £800 to him and 16 others, and an annual pension of £50 for him. His previous salary of £50 as an assessor under the Native Circuit Courts Act 1858 had been withdrawn because of his opposition to some land sales. ‘Hiko’s Sale’, as it was afterwards called, stirred up so much opposition that other leading chiefs petitioned Parliament. This resulted in the 1891 commission of inquiry into the ‘Claims of natives to Wairarapa Lakes and adjacent lands’.

Although Te Hiko has been accused of betraying his trust, the story of the sale suggests that he, by now a very old man, was placed under extreme pressure by those who wanted to sell. Te Manihera started to apply pressure in 1874. He suggested that he and Komene Piharau should represent one group of the lake’s owners; Te Hiko suggested that he and Hemi Te Miha should represent the others. In 1876 they all went to Wellington. Although Te Hiko seemed ready to co-operate in the sale, his real purpose was to settle problems that had arisen over the sale of the Pukio block. He told Edward Maunsell, the government negotiator, that he would not discuss the lake while Pukio was not settled. He also warned Hemi Te Miha, on the way to Wellington, not to consent to the sale of the lake. But when all the parties met, Te Miha was the first to agree to the sale and append his signature. After this Te Hiko felt that he had no option but to give his consent.

There was a further quarrel about the method of payment. Te Manihera wanted it paid in Wellington at once; Te Hiko wanted it paid over in Wairarapa so that the people could be present and benefit from the sale. As a result Te Manihera and Komene Piharau refused to sign. As Hemi Te Miha was of lesser rank, the sale of the fishing rights to the government became ‘Hiko’s Sale’.

In 1891 before the commission of inquiry Piripi Te Maari-o-te-rangi connected Te Hiko’s consent with his resentment of the pretensions of Raniera Te Iho. As early as 1872 the government agent, Richard Barton, had been authorised to treat with Maori owners for control of the opening of the lake. He had excluded Te Hiko, and dealt only with Raniera Te Iho and Piripi Te Maari. Te Hiko was already incensed by Te Iho’s appropriation of a reserve out of the Turakirae block. Raniera Te Iho was a young man, not yet qualified to take a leading part and he was ignoring the mana of his elder. Te Hiko’s consent to the sale of the fishing rights may well have been influenced by a belief that in any case those rights were being taken away by the acquisitive younger leaders.

Hostility about payment continued. Over Te Manihera’s violent objections, Maunsell paid over the money at Featherston. On Te Hiko’s instructions half was paid to Wi Kingi Tu-te-pakihi-rangi, the successor to the chief who had negotiated the return of Wairarapa from Te Wharepouri. Wi Hutana, Te Hiko’s son-in-law, used the other half to erect a sawmill at Pukio, which was intended to benefit the people at large.

At the time of these negotiations Te Hiko was old and infirm. He died on 1 July 1881, aged about 90 years. His wife had died in 1873, aged 75 years. They were both buried at Tuhitarata, in the cemetery where members of the McMaster family were buried. In 1905 his daughter Ani presented his canoe, Te Herenga Rangatira, which he had always used on the Ruamahanga River, to the Colonial Museum. T. H. Heberley carved it in the manner of a war canoe, and it is now displayed at the Canterbury Museum.