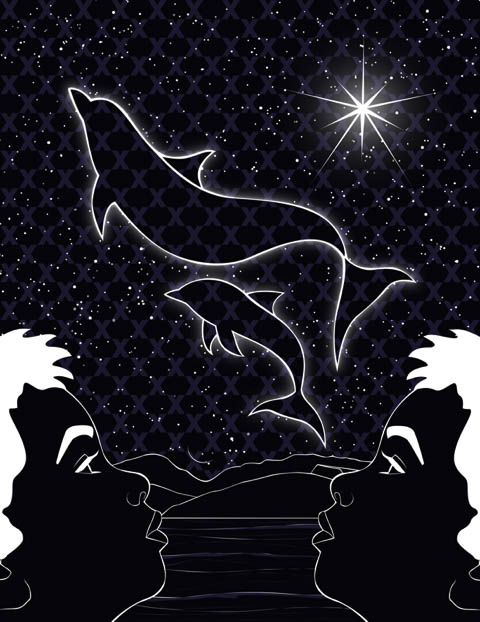 The morning was good for fishing, the sea was calm and there were no bad signs. The koroua told two grandsons to make ready as they would leave soon. When their small boat was ready they started off out towards the fishing grounds in Te Moana Nui A Kiwa.

Once they were far out to sea the weather suddenly turned bad. At first the waters turned slapped against the side of the boat causing it to tilt to and fro. As the wind grew stronger the waves became bigger and bigger. Spray washed over the side as the boat as it bobbed up and down in the turbid water. The boys became worried that they would be swamped by the angry sea.

On the shore the family had watched dark clouds gather in the distance and knew that soon the sea would change. As the little boat was out of sight they began to worry and when it did not return the situation was all the more dire.

Even though stuck in a raging storm the koroua kept his composure. He told the boys to lower their heads below the level of the top of the boat so as to not be stung by the whipping spray. They did this and so kept out of the path of the stinging water. They could not see anything but heard their grandfathers voice. The old man stood calmly balancing precariously reciting karakia over and over.

The Kuia on the shore could not see the boat and therefore thought it must be lost. They began to tangi for the lost loved ones.

Out on the sea the boys could hear the karakia, their grandfathers voice rising above all the other noise, becoming stronger and stronger. Then something hit both sides of the boat, it felt as though they were lifted out of the water. No longer were they rocked violently from side to side but instead moved swiftly and surely through the water.

The karakia continued, then somewhere in the distance the voices of kuia were heard joining in imploring the seafarers to return home. The boys kept their heads down listening to the voices of their grandfather and the female voices.

Just as the storm had come from nowhere the boat suddenly hit solid ground. The koroua told the boys to keep their heads down for a bit longer. As they stared down at the bottom of the boat that was half filled with water koro said thanks to something. He then said the boys could get up. Rising to their feet the boys looked around, they were home, all the family standing on the beach relieved to see them. The Kuia still crying with the relief that no one had been killed at sea.

Then the boys thought to look back out to the sea. Both turned and there disappearing beyond the breakers were two magnificent white Dolphins, the kaitiaki of their family.