This story comes from the Gladstone area. It is the tragic tale of a young woman who commits a heinous crime while in a grief stricken panic.

Many, many years ago our ancestors lived in papakainga beside the numerous streams that flowed into the ancestral river, Ruamahanga. A young woman lived with her whanau at Parakawhara, the place that we now know as Gladstone. She was very content at this time because soon her first-born child would enter the world of light leaving the safety through the sacred river of life that was her womb.

One day the woman was outside tending to the weeds in a garden when an irresistible urge came upon her, a feeling that was unknown to her before that moment. She instinctively knew that it was time to have her baby and the child was ready right then.

The gardens had been placed on a lower terrace from the kainga so that she had to walk some distance to get back to the village. Although she knew that the kuia with expertise in delivering children had been waiting for the day that she would go into labour for sometime her body told her that the baby was coming now.

The distance to the whare kohanga, the building built especially for her special event was to far away. So with surprising calm she walked out of the garden gingerly making her way underneath a large totara tree that sat in amongst a thicket of smaller trees.

Within the privacy and shelter that the trees afforded her the young woman brought her own child into this world. Through the pain of birth she felt an indescribable joy as she had now contributed to the ongoing maintenance of her families bloodline.

With tears of happiness and sighs of relief she looked down to her newborn babe, but much was wrong. Instant despair came over her; she started to shake with disbelief and to wail in revulsion at what met her eyes.

The baby she had dreamt about for nine months was so severely disfigured that its form was hardly human. Nothing but dread and fear rushed through her mind so that in a moment of madness and utter panic she gathered up the poor infant and ran towards a nearby stream. In the depths of a waterway full of the life giving power of waimaori the babe drowned within minutes of taking its first breath. In other circumstances the baby’s first immersion in water would have been through the process of cleansing and dedication of the tohi ritual, but for this little one it meant premature death.

By the time that the woman realised what she had done it was to late so her thoughts turned to her new predicament. When she returned to the kainga the people asked her where her baby was. Her account of earlier events was honest and exacting up to the point that she first laid sight on her own flesh and blood. At this point she tried to convince both herself and everyone else that the mischievous turehu or fairy folk had come down from the mountains and spirited her child away.

Although turehu were known to do such things the people saw that there was no conviction in the story and suspected that a far different fate had befallen their mokopuna. Although no one could prove anything the once cheerful and industrious woman became possessed with hidden demons.

One day some months after the time of the babies birth and immediate disappearance a group of men went to check a pa tuna the special place where they catch eels. They had proceeded out from the papakainga, down the terrace, skirted around the gardens, beyond a grove of native trees and down to the stream where the pa tuna was located. As they had set all of the hinaki or eel baskets the night before all they had to do was empty them of fish.

The mother who would have been was sullenly going about her business when it dawned upon her that the men had gone to the place where she had killed her baby. She nervously awaited their return lest they should have discovered any evidence of her crime.

When the men returned they gave no indication that anything out of the usual had occurred down by the stream. They entered the village confines carrying large kete laden with the catch that would sustain the people for weeks. This was a time of celebration for the people due to the atua obviously looking upon the people favourably.

Each kete was taken over to special large mats where it was placed before the eels could be prepared for eating or preserving. Kaumatua recited karakia to thank the atua for giving the eels so that the people were fed. Soon the last kete was laid down and even the woman felt somewhat positive about the day’s events so far but even more so about the rest of the day.

The leader of the fishing party opened the last kete that held but one eel. One after the other and sometimes in groups mouths dropped open in disbelief or knees dropped to the ground as eyes filled with tears. One of the last ones to take in the scene, or to realise what was happening was the young woman.

She ran, ran far away never to return to her village or to see her whanau again, an exile scorned by her own until she died. Her guilt attached in her mind and her heart forever as she wandered from stream to stream, river to river looking for her baby.

At the moment that she ran the full horror of her deeds was getting etched upon the minds and into the history of her people forever more. Whilst all had seen the eel once not many could draw their eyes back onto it a second time. This tuna had a marked difference to all of the others laid out on the mats – from its tail along its body and right up to its front fins it was the same, the onlookers were dismayed to see that it had the face of a newborn baby child.

The fate of the mother was certainly deserved but the eel child could not help its predicament. Although the people could not treat the creature as a human they could accept that at least in part it was still of them. The eel child was taken back to the pa tuna. The whole stretch of this stream was declared tapu which meant that no more fishing occurred there again, a fitting home for the eel but also another reason why the ashamed woman was banished.

For generations the people cared for the eel child. Then for an unknown reason it was forgotten about so that only this story is left over to remind us of the young mother and her baby. 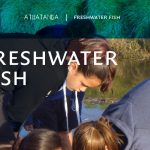 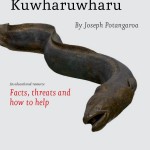