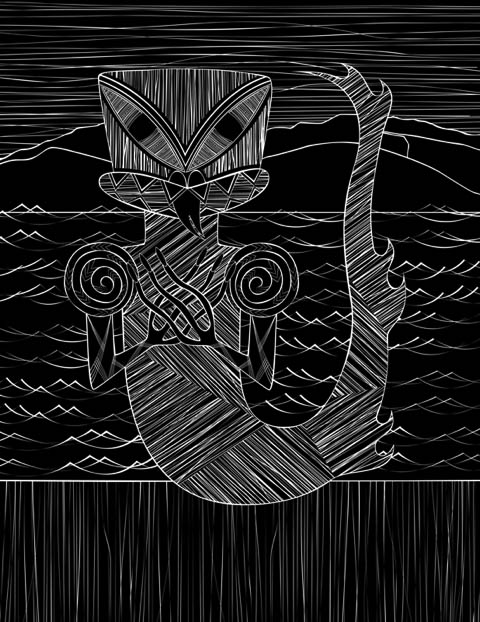 Long ago a giant taniwha named Ngarara Huarau lived in a cave under the ground at Makorotai on the Heretaunga Plains (Hawke Bay). His family had all left, or died, and he was by himself. He was lonely and tired of living by himself in a cave so he decided to visit his sister Parikawhiti who lived in the Wairarapa.

With a great roar he came out of his cave and, with his mighty talons, split the land open leaving a huge chasm. In doing this some of his scales fell off and became Tuatara Lizards.

Setting out for the ocean he burst the land open and cut a big channel. This channel and the chasm filled with water and became the Tiraumea River.

Arriving at the great ocean of Kiwa he began his journey south to the Wairarapa. On his way he stopped at every river, lifting his head up high and sniffing to see if he could smell his sister. On arriving at the mouth of the Pahaoa River he became very tired and decided to rest there for a while.

He continued his journey south and swam up the Pahaoa River, into the Wainuioru River and finally the Marumaru stream. When he reached the far side of the Maungaraki hills behind Gladstone he was stopped by a very high steep hill. By this time he could smell his sister and knew she was near. He was very excited. He tried to jump to the top of the hill, but he kept slipping back. He tried again and again. At last he managed to get his feet on a ledge and jumped to the top leaving the marks of his footprints at a place called Hautua Pukurau o Ngarara Huarau.

He rested for a long time at the top. He could smell humans down in the valley below and hid himself from them. Later, he moved on down into the Kourarau Valley where he made a lair among the Kahikatea trees. From there he finally reached sister Parikawhiti, who lived in a cave in the side of the hill at a place near the present Gladstone Hotel. This place is named Te Ana o Parikawhiti.

Ngararau Huarau was happy to see his sister and decided to make a new lair in the Kourarau Valley where, soon after, he terrorised the local people. He caught and devoured any unsuspecting person who passed near. He also raided further affield. It became obvious to the people there that they would have to kill the taniwha before he devoured them all.

A young warrior called Tupurupuru, who lived in a nearby pa took it upon himself to kill this beast by setting a trap. Along with three of his friends he worked out a plan to take the taniwha by surprise.

Working quietly, while the taniwha was asleep, the men partly cut through the huge kahikatea trees around his lair. Then Tupurupuru crept up to the entrance and loosely tied a dog to a tree. As he crept away the dog began to bark and soon Ngarara Huarau appeared from inside his lair. With a great roar he rushed out of his lair thrashing his tail about. The dog broke free and ran through the trees where Tupurupuru and is friends were waiting. Ngarara Huarau was very angry and began to chase after the dog – roaring and thrashing his tail about. As the beast neared the trap his thrashing tail brought the partly cut trees crashing down on top, hurting him so badly that he was weakened by the injuries. The warriors immediately rushed up and began to kill the taniwha with their spears and clubs.

Ngarara Huarau managed to survive the brutal attack only to be driven into the swamp at Uwhiroa where he later drowned. 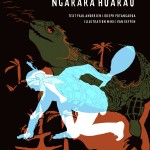 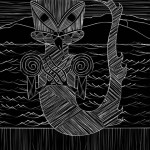