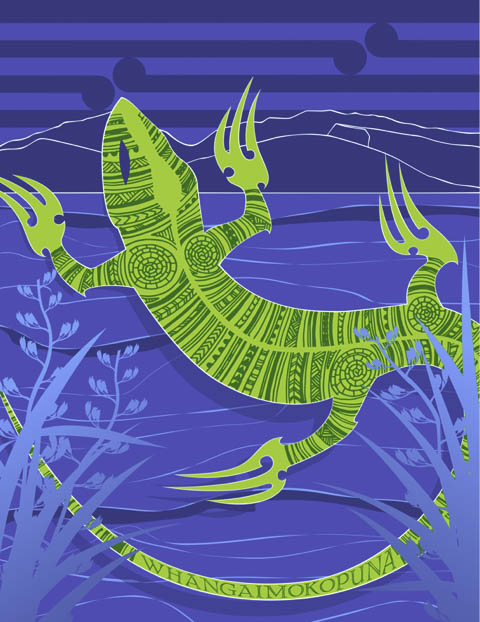 The bed of the river (Manawatu) was affected by the exploits of a famous taniwha named Whängaimokopuna whose home was originally at the mouth of the river. Unlike most taniwha, Whängaimokopuna was a pet. His owners, the people of Motuiti, fed him on the choicest portions of eels caught in the area and apparently spoiled him thoroughly. One day when the elders were away, the children who had been left in charge of the pet saw no reason for coddling a taniwha, so they fed him on the heads of the eels, keeping the best portions for themselves. Whängaimokopuna was naturally upset and he seized one of the boys and swallowed him. When the elders returned the boy was missed, but while they were searching for him, their pet vomited up the boy’s remains. It was now the turn of the parents to be upset and Whängaimokopuna fled from their anger.

The taniwha went inland until the sound of the sea was inaudible, hence the name Taikorea (sea blotted out), now known as Taikoria.

Whängaimokopuna eventually decided to continue up the river and passed through the Manawatu Gorge. He carried on until he neared the point where the Tamaki River entered the Manawatu (between Tahoraiti and Dannevirke) where the river then took a sharp bend and passed round some high hills. Whängaimokopuna saw no point in travelling all that distance, so he simply cut his way straight ahead through the slopes of the hills, leaving a high cliff which later constituted part of the natural defences of the Rangitäne pa, Raikapua. This straightening of the river-bed left a depression on the south-east side of the river which is now partly occupied by the Mahangaiti Lagoon at Kaitoki.

Whängaimokopuna continued upstream till he reached the Mangapuaka Stream, which he followed until he reached its source in the hills now known as the Whangai Range after him. The Mangapuaka Stream had previously been the home of another taniwha named Te Horearua whose name is perpetuated in a peak, now a trig point, on the Raekatia Range south west of Ormondville.

The taniwha still lives in the mountains and that whenever Rangitäne people from the lower Manawatu visit the Dannevirke area, a mist descends on Raekatia mountain. This is Whängaimokopuna weeping for his old friends.